The last few voyages led us far up North to Tornio on the Finnish – Swedish border just below the polar circle. During the summer the weather in the Baltic area is usually very calm which has advantages. There it is for instance almost 24 hours a daylight with more sun during the night than in central Europe during daytime! And because the summer starts late up there, the trees have just gone green and the flowers just started showing up.

These long periods of sun on top of the relatively cold water of the sea lead to mirages and fata morgana’s showing up now and then. It was a new experience for me and quite special to see a ship sailing by, actually not in the water, just floating a ships height up in the air. Later that day a lighthouse just vanished in front of my eyes and showed up again later ahead of the ship but upside down! Even a full factory with smoking chimneys was visible in mid sea. 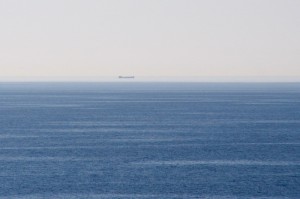 Cold air is denser than warm air and has therefore a bigger refraction index. As light passes from colder air across a sharp boundary to significantly warmer air, the light rays bend away from the direction of the temperature difference line. When light rays pass from hotter to cooler, they bend toward the direction of the gradient. If the air near the sea is warmer than that higher up, the light ray bends upwards instead of down resulting in an upside down image.

While the reasons for mirages are well known, some other sights are still mysterious even to scientists. The prolonged periods without wind can cause patches of fog to float over the water. At times they are so low that the ships bridge is high enough to reach out above the sea of clouds. In that situation it is a beautiful sight to see a ship passing and its bridge and mast plowing their way through the clouds. If the conditions are right, the clouds can act as a projection screen and a shadow appears like a ghost with a glowing ring, so-called glory or Brocken Spectre. I was able to capture this image with my own shadow standing on the bridge wing. 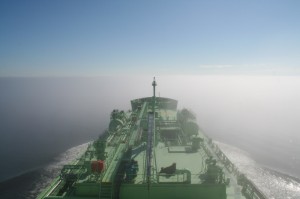 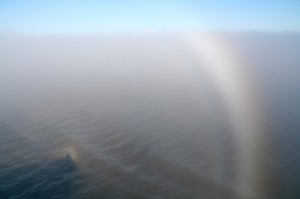 The glory can only be seen when the observer is directly between the sun and cloud of refracting water droplets. The effect is believed to happen due to wave tunneling, when light nearby the droplet tunnels through air inside the droplet and, in the case of Glory, is emitted backwards due to resonance effects. Unlike rainbow, geometric optics cannot not provide explanation for the formation of glory. Glory can be simulated mathematically in a computer, however, the physical mechanism for the formation of glories is complicated and not fully understood.

Even in the high tech world we live in today there are mysteries remaining and discoveries to be made. That is what I especially enjoy whilst at sea!